The ventilated façade is an exterior enclosure system that allows for the regulation of the temperature in a building, optimizing the thermal and acoustical insulation by means of an air movement chamber. The intermediate chamber reduces extreme thermal changes in-between the parallel structures. It eliminates direct exposure to thermal radiation and consequently contributes to the protection of the building envelope.

The use of natural ventilation that these systems provide happens to be the most efficient strategy for the passive cooling of a building, and becomes quite relevant in places with major solar exposure. In cold weather, Simpleyfácil’s ventilated façades operate as an accumulator of warmth, thus limiting the direct impact of cold temperatures on the primary façade.

HOW A VENTILATED FAÇADE REGULATES TEMPERATURES

The technical façade systems are designed to meet the demands of modern construction architecturally and in performance driven specifications.

The test results of the technical façades will show the most relevant characteristics that might be called for depending on the parameters of every project and the national and international standards that apply. 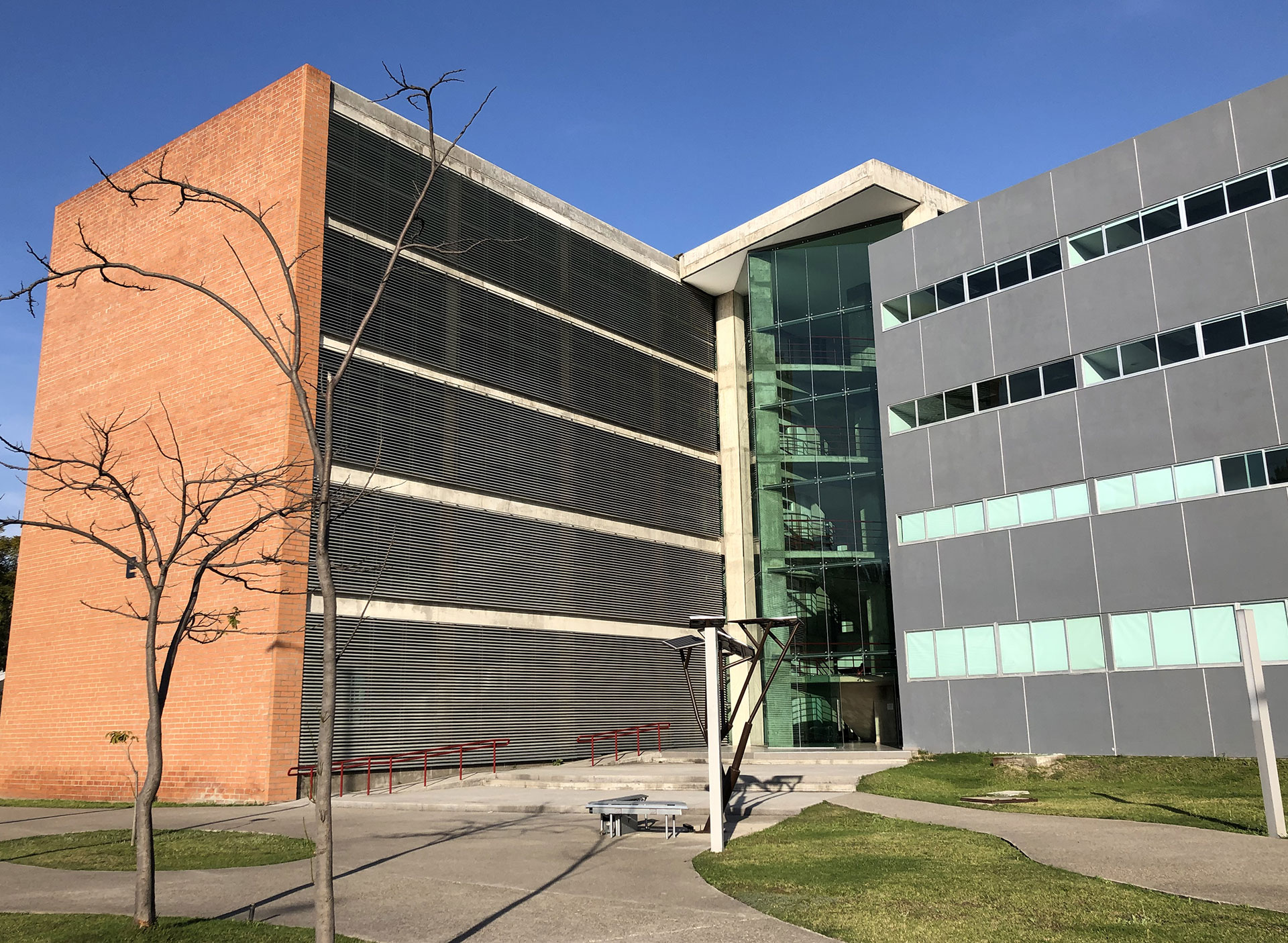 The design façades prioritize aesthetic versatility over technical demand, while maintaining the basic properties. Through the use of our standard componentry, the Design Façade system allows for the maximum amount of versatility by the utilizing our unique forms and compatible tools to give designers the building blocks for a facade that is their own. 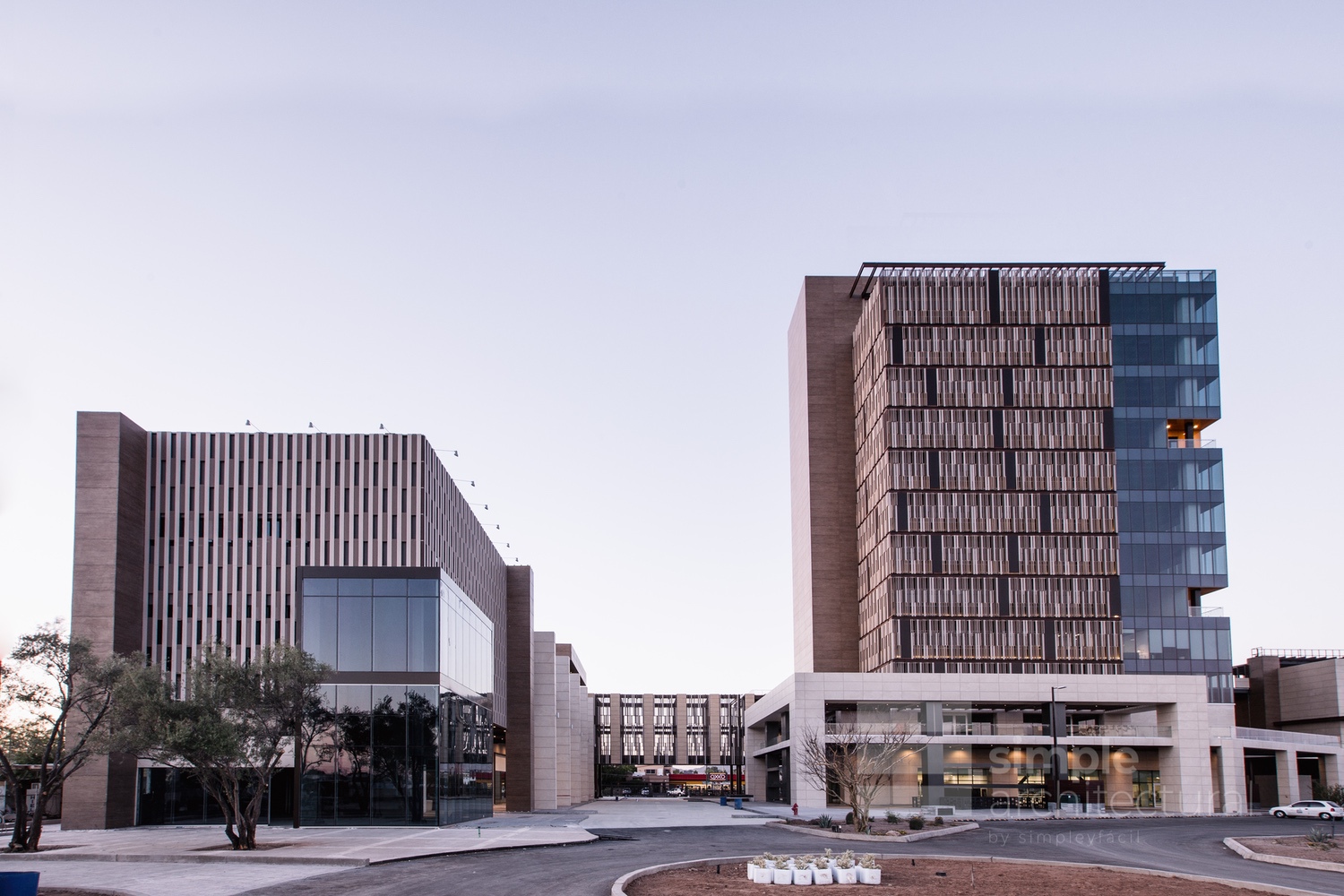 The press-in-place systems designed by Fácil Façades consist of a basic or skeleton structure integrated by aluminum profiles called supports, upon which the various slat models are anchored in order to create the canvas or skin of the ventilated façade. 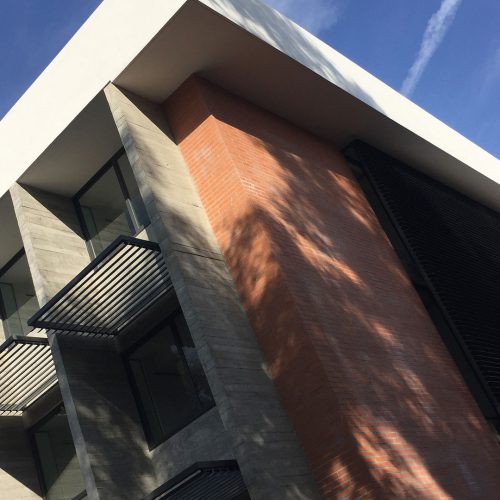 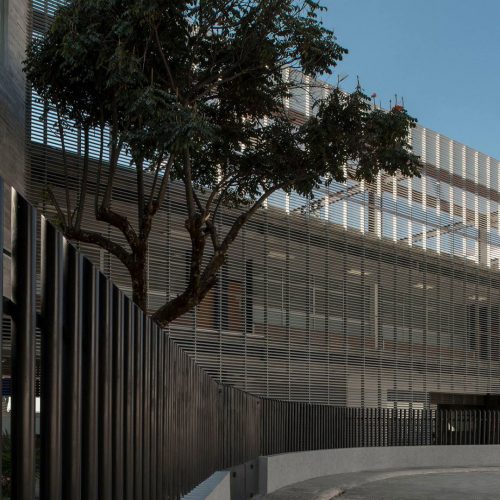 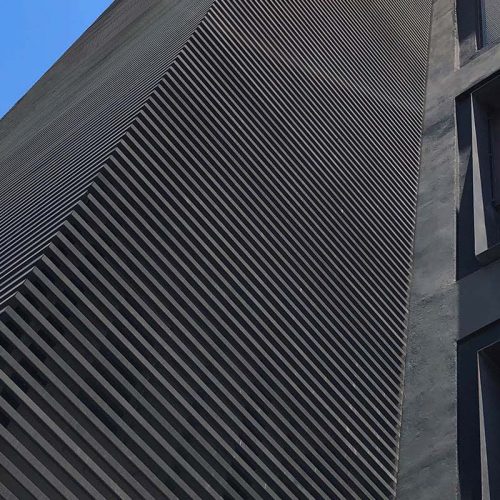 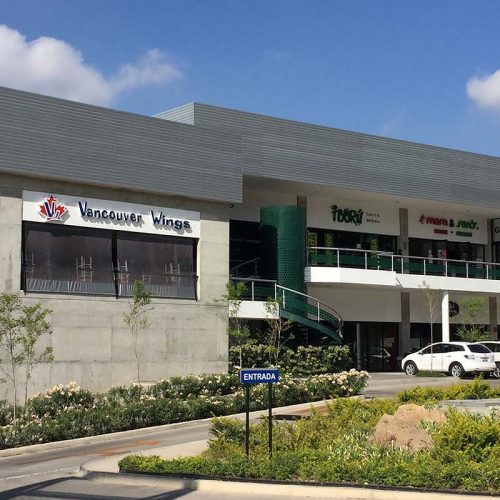 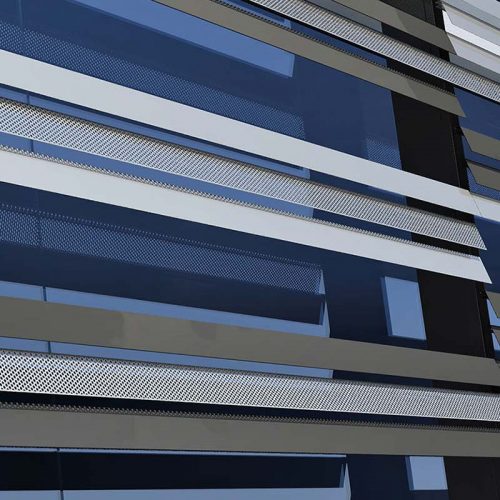 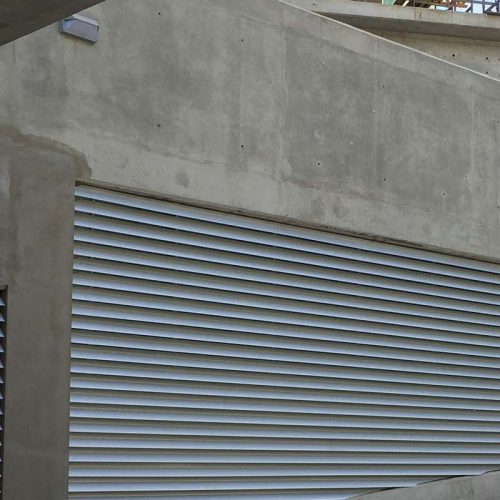 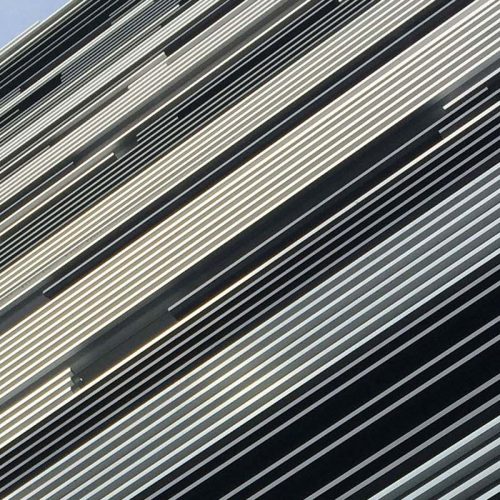 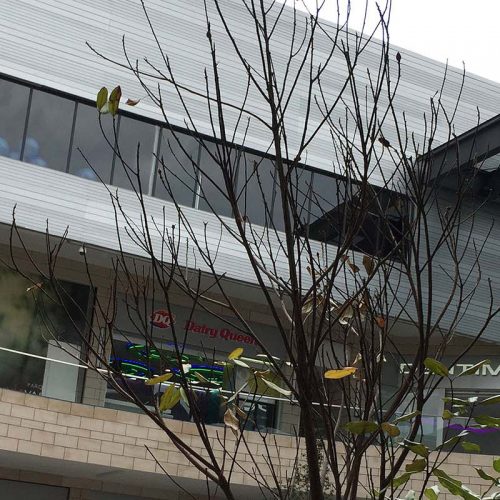 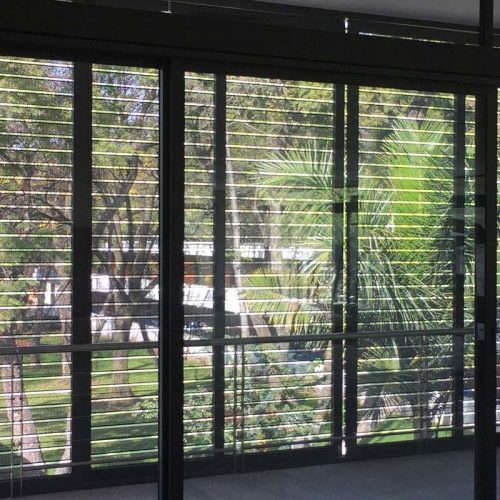 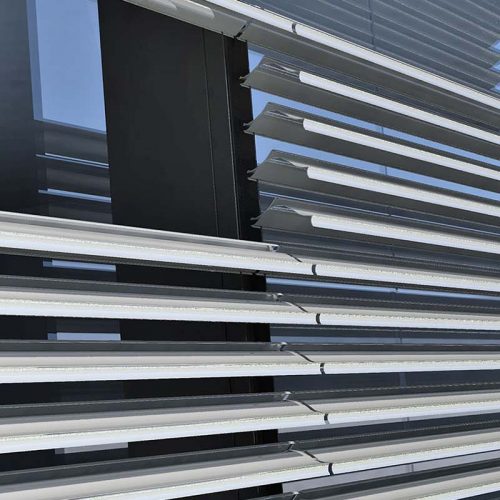 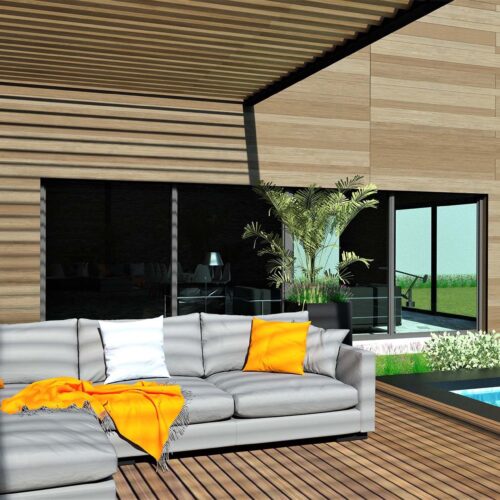 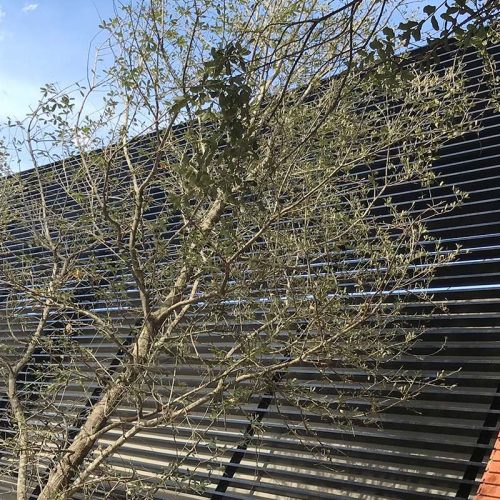 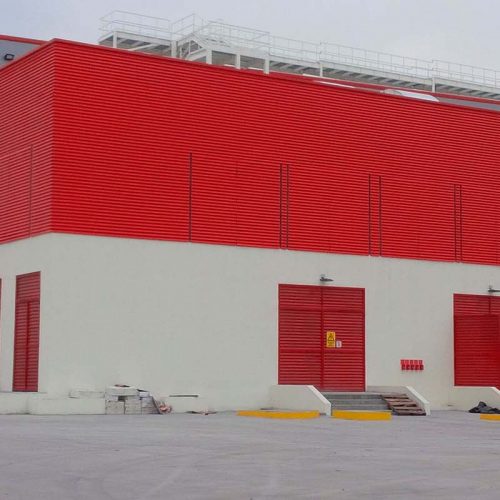 The option to install the slats by means of a mechanical assembly was developed to address the necessities of large glass surfaces, where a clean look with a limited number of vertical supports is called for in order to preserve a major visual transparency.

The mechanical attachment of the slats to the building structure is done by brackets that stick out of the flat surface of the structure. The installation of the slats in various inclination grades limits the direct solar impact and projects shadows onto the building envelope, resulting in a temperature reduction in the building.

Another option is to install side plates on the interior of the structure. These are offered in various designs so as to create different façade design patterns. 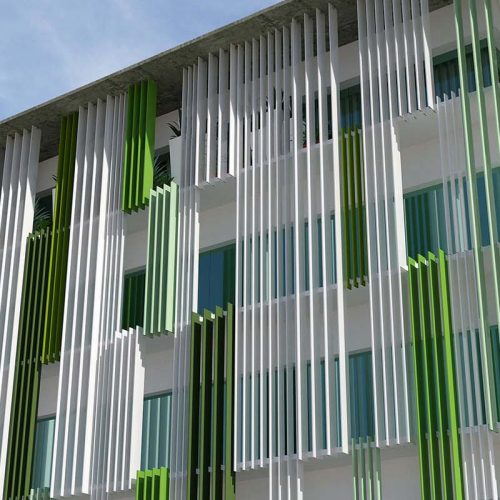 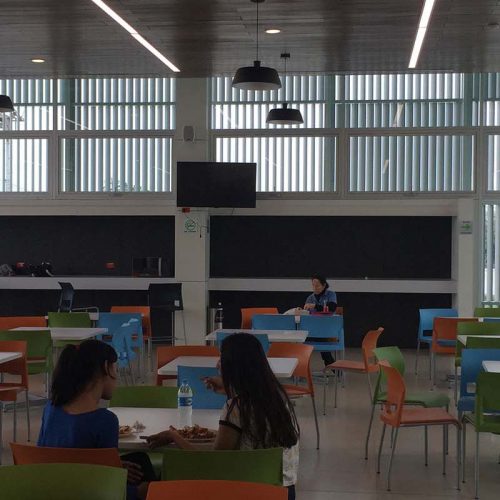 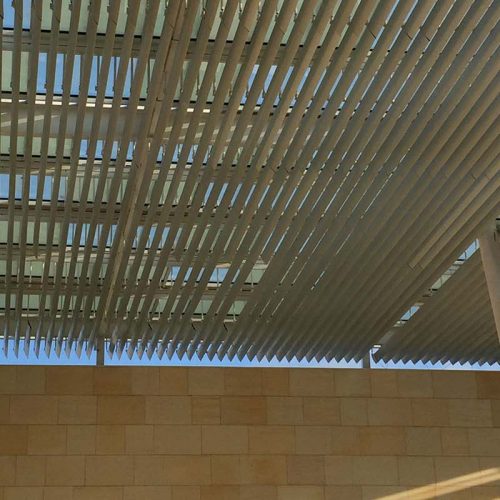